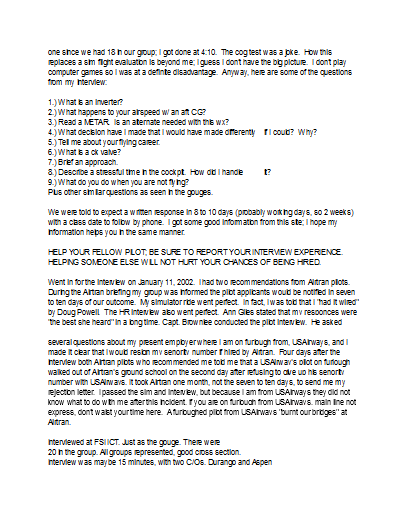 I contacted their chief pilot after having seen a letter he posted on my current company’s MEC web board. He expressed sympathy for our plight and offered a chance at doing some contract work for JAL. A nice letter I thought, so I E-mailed him my resume. The next day he called me and told me all about the company: pay, benefits, etc. A few days later their personnel manager called me and we had a mini-telephone interview. “Why do you want to work for us?” He then set up the interview date. There are a few paper work hurdles to jump through – background investigations, FAA record requests, company contacts and such but no big deal. OK, now to the meat.

Day 1 is free, positive space travel from your home to DEN. It’ll be an early departure to arrive in DEN by 1PM so it’ll be a long day. Check-in at the company paid Renaissance Denver Hotel. You’ll get a package with a schedule of events for your group and the most important thing “the profile” for the sim eval. You’ll have a much easier time if you can get your hands on this thing before hand from somebody who’s interviewed already. It lists all the crazy call-outs (SPEED CHECK, FLAPS TWO ZERO, SPEED BUG ONE SIX ZERO, etc, etc, etc) that they what to hear during your check. STUDY IT from the first minute! There are 6 candidates per interview class. The other candidates in my group were all fairly young corporate or commuter types with tons of hours. I was the only old fart with a major airline. At 3:45 the testing began. Don’t sweat these tests. I’d recommend getting the ASVAB test book to prepare. There were simple math problems (Bob bought 5 apples for a quarter), vocabulary (phlegmatic), science (who invented the steam engine, the telephone), spatial orientation (pick the object on the right that is the same as that on the left just rotated), Picture stories (arrange the pictures (3-6 of them) to tell a story), literature and the arts. All tests are timed and you probably won’t finish any of them. The “cultural adaptability” test is the only written test and it’s just common sense. I don’t think it matters how well you do on these, it’s just a hoop to jump through and to see how well rounded you are. After the timed tests we had a break and the company bought us all dinner- nice. After dinner we took the MMPI, the most ridiculous test ever conceived. Just remember that you are a good person, you loved both your mother and father but your mom a little more, and that all humans have some faults -- and you’ll do fine. One guy had to take it twice but I think it was a cultural thing since he was French born. There is a rumor that... Continue Reading this Interview Experience