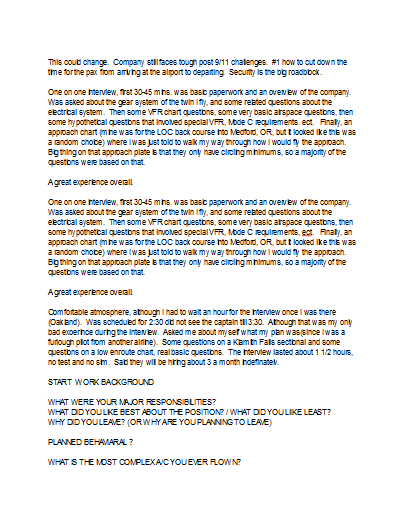 DAY 2 began at 6AM with the company paid breakfast buffet- again, nice- followed by the 7AM “this is WASInc” presentation given by the founder/CEO. On the surface it seems like a great story and you can almost buy into it, but you need to look at it as a professional. The REAL story is: QUESTION: “How do I run a really cheap contract operation?” ANS: You recruit a bunch of flight attendants from a poor foreign country, team them up with high time, experienced, but under-paid/under-employed (corporate/commuter) or down on their luck (furloughed) pilots and flight engineers, then pay them HALF of what they should be making but more than what they’re getting now. SIMPLE. I don’t mean this in a derogatory way at all; like they say in the GOD FATHER; it’s not personal, it’s business. But I digress… The 15 min (yes, you read it right) interviews follow after the presentation. Mine consisted of: “How did you get interested in flying”. I gave them a 5 minute spiel on my life and then we just chatted about the state of the industry. That was it! No F-ing human resource A-hole or the “if you were a vegetable what one would you be” or “tell me about a time when you F’ked up” crap. It was really very low key. I don’t think this is the kind of interview where you should try to “SELL” yourself; one guy tried it that way and got sent home the next morning – just be likable. I think they’re trying to find out if you’re the kind of guy they could spend 10 hours in the cockpit with. After the interviews you will go over the SIM profile with one of the Asst. chief pilots. He’ll explain it in detail. It is done in three parts and set at MSP 30L: 1. Short Taxi and T.O. Rwy Hdg to 3000’, Left OR right turn direct NARCO, Climb to 4000’. At NARCO turn left or right to 090 or 150 (direction of turn is the same as the one at T.O.), Start Timing and descend to 3000’ @ 1000’/Min. Just after level off, make a 180 (you do the math) to intercept the localizer and land. Be careful which way you turn inbound. 2. Start on the runway, take-off Rwy Hdg to 1200’ turn left OR right on Radar vectors; climb to 4000’; Vectors to the ILS; on base turn descend to 3000’ and intercept. At 1000’ take over visually and land (they turn off the ILS). 3. Frozen at 4000’ on a dog leg to final. Just after the motion starts you get an engine failure. Run the memory items, then descend to 3000’, level off, intercept the ILS and land. During all of these you’ll be changing flap settings and making lots of required call outs!

After the briefing you’ll have... Continue Reading this Interview Experience