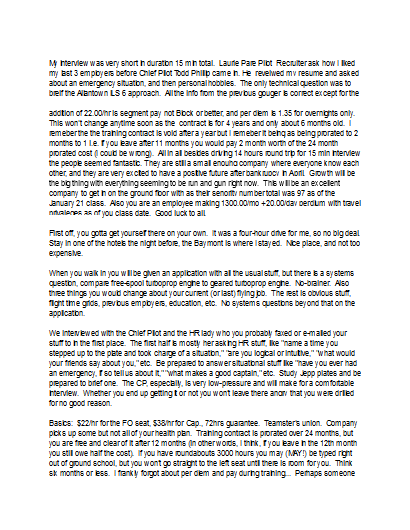 I received and email asking about a time that was best to setup a phone interview. They were very punctual and called at the exact time. The phone call lasted 45 minutes. The call was a chance to get to know you and ask a few questions. There were 4 people on the conference call, the director of aviation, a chief pilot, a standards guy and a female captain. They took turns asking questions. Some of the questions they asked were: How did you get in to aviation? What do you know about Walmart? What do you know about Walmart Aviation? Why Walmart? Are you willing to relocate to NW AR? What are alternate mins for part 91? Does V1 change on a wet runway? Why? Accidents or violations? Afterward they allowed me to ask them questions.
After a couple of days I received a call inviting me to Rogers for a formal interview. We were given about 10 days notice from the invitation to the interview.
Arrived to Rogers, AR the day before the formal interview. Walmart covered travel and hotel expenses. Sunday night before the interview the 8 applicants, myself included, were invited out to dinner on their dime. There were about 12-14 Walmart Aviation associates made of up management and a few line pilot on the hiring board. Though this is a casual dinner the interview has begun. Be as friendly as possible to everyone including the wait staff. They are getting to know you and observing your social skills and how you interact with others. The dinner wrapped up after just shy of two hours.
The next morning we met in the hotel lobby at 730. We were divided in to two groups of four based on location from Rogers. The more local people started the formal interview process and the other group went on the tour. The formal interview consisted of three parts: Written exam, scenario, and panel... Continue Reading this Interview Experience