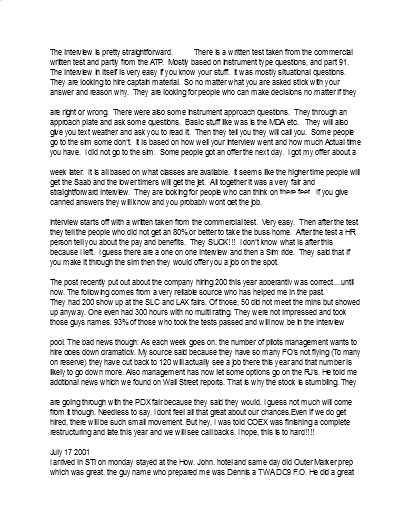 All the gouges on this site are essentially correct. On July 7, 2016 I interviewed for an FO position with PlaneSense. The application process was repetitive and arduous. First I sent a resume with all my credentials attached. Not too long later I was invited to apply formally. This time copies of the same creds all over again plus more. I sent this to their web site as requested but their email mangled it. After hearing nothing, I called the HR boss and she called me back in five minutes telling me what happened and to resend it. I think a lot of it had to do with the fact that the package was about 8 meg and too big for their server. 7 meg worked. Anyway, I heard nothing for about a week. So I called again and she said I was on her list to call...it turned out to be an invitation to interview. I was very happy about this. Their letter was very specific as to the three parts of the interview: HR, Tech, Sim, no special order. I met first with two HR people (one very new) and two salty types. I was not at all intimidated and they were cordial. I answered every question.  After maybe 40 minutes I was sent back to the lobby to wait for the tech interview. There was very little waiting. They were very well organized. The interviewer was a chief pilot or something like that, a nice young man who again was very cordial. He showed me several approach plates and asked questions about... Continue Reading this Interview Experience