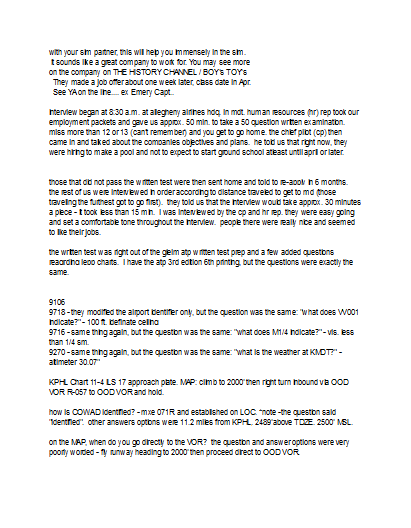 Simulator: Here are four things I think could help future applicants, especially if in the challenger simulator: - 1: google "sky pointer vs ground pointer" as they are two different formats for displaying bank on the attitude indicator. Thankfully I've flown both, but it caught me off-guard at first. - 2: ask if they can tell you physical approximate TLAs (thrust lever angles) for straight and level and for an ILS. It seemed like I only needed the thrust levers about 10% forward to be straight and level at 200 knots, which really threw me off-guard. I was too busy just trying to keep it under control to see which vertical green line represented which portion of what engine parameter.. having an idea of where to physically put the thrust levers would have helped a ton. - 3: ask where the inclinometer / slip-skid indicator / trapezoid is before your V1 cut - 4: ask for alternate go-around instructions in advance just in case you botch your ILS or reject the landing I did the sim first, and it. was. ugly. It was an old challenger 601 steam-gauge, and the profile and expectations were exactly as described in the previous gouges. Expectations: - can you keep an aircraft you're completely unfamiliar with under control (more or less)? - can you... Continue Reading this Scenario